1996 – Tower #3 Ventilation Shaft utilising the raise-boring technique is in progress. 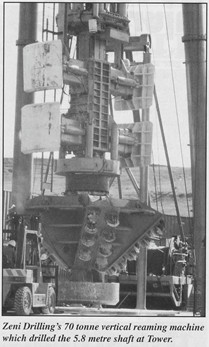 1997 - The original 2.44m diameter raise bore is down-reamed utilising a VRM (vertical reaming machine), a converted tunnel boring machine. The VRM was persevered with until at 478 metres depth it was withdrawn due to ongoing difficulties and the remaining 37 metres (to seam) completed by shotfiring, the final shots were fired on 13th May 1997.

2002 – General information to BHP staff ex Mine Manager, Frank Hendriks, 20/12/2002; “The entire Tower Colliery workforce, excepting key staff, worked their last shifts on 19th December, 2002.” Recovery of all equipment after the completion of L/W 20 was completed by afternoon shift 19/12/2002. Future activities limited to the automation of u/g pumping from Appin White Panel.

2002 – 31st December, Tower Colliery closes being integrated into the Appin Colliery mine workings and being known as the Douglas District. The Tower shafts to be renamed Appin #4 and #5 remaining as Men & Materials to Appin Colliery with Longwall production coming to the surface at Appin pit top. Appin moves from L/W Area 5 to Douglas District Area 7 with a proposed 300 metre face length planned. 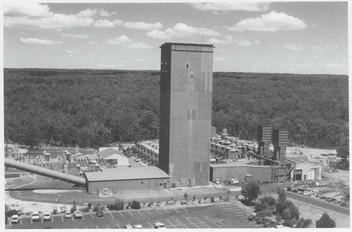