1884 – A Mr Hardy (mining engineer and member of the North of England Mining and Mechanical Engineers, also a certified colliery manager), at the request of the Hon. J. B. Watt, Messrs. W. C. Watt and J. J. Weston of Sydney, was prospecting for coal in the Calderwood Mountain. He is reported to have found no less than 5 seams of first class coal ranging from 4ft to 17ft together with an oil shale seam and a 20ft seam of ironstone. (The Queenslander – Brisbane, 4th Oct. 1884)

1884 – Six prospecting mines have been driven several yards into the mountain side testing the quality and thickness of coal. About 30 ft above these 6 seams is the well-known upper seam of the Illawarra. The prospectors have not yet discovered this seam. Meanwhile all prospecting operations are suspended. (DoMAR 1884) 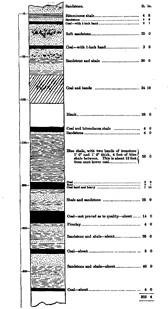 1884 – A section, taken by John Mackenzie F. G. S., Government Examiner of Coal Fields, of the strata and coal seams opened out by Mr. Hardy, colliery viewer, on Messrs Watt and others 143 acs. mineral conditional purchase, near Dapto, Parish of Calderwood displayed on pp137, DoMAR 1884. However No. 1 seam had not been looked for at the time of inspection.

1905 – P. Bryen, the mine manager of Avondale Colliery, on 26th January, notifies the DoM of his intention to prospect for coal. (DoMAR 1905)

1908 – A report that Wongawilli has been sold ……and negotiations are proceeding steadily for the disposal of Mr. P. Bryen’s mine at Avondale. Samples of coal are being tested for coking purposes. (SMH 12/10/1908)

1909 – 13th Oct, Mr. C. E. Bird, Manager of the Avondale Coal Syndicate, notifies the DoM of his intention to drive two prospecting tunnels in connection with Avondale Colliery on Mr. P. Bryen’s farm. 18th Oct, Mr. Bird notified that the first of the two tunnels had been commenced and that operations in connection with the second one would be commenced at an early date (DoMAR 1909)

Opened in 1911 by the Illawarra Steam and Coal Co. Ltd. Proposed to lay 4 ½ miles of rail line to the colliery. Wollongong Library

(no rail line was ever laid).

1911 – “It has been decided by those syndicates interested to issue the prospectus of the Illawarra Steam and Coal Company Limited (sic). The company will shortly be on the market to operate the freehold and leasehold lands held by the vendors at Avondale, near Dapto. The active operations will take place about February 1. The opening up of the colliery will be pushed on with a view of delivering the coal in January 1912. The new mine is situated at Avondale, half a mile south of the Dapto railway station and from the colliery to the railway, four and a half miles of railway is to be put down. The area of the property is 1300 acres and there are six seams, three of which have been thoroughly prospected at various points. Five tunnels have been already driven in a distance ranging from 40 to 100 yards. The company also intends to manufacture coke extensively”. (SMH 16/01/1911 p11, ex Trove)

1912 – An application on behalf of the Avondale Coal-mining Syndicate for the suspension of labour conditions with the Avondale coal seam. Captain Bird? said that development work had been carried out and it was expected that a company would be floated at an early date. Suspension was granted for six months. (SMH 20/2/1912 p11, ex Trove)

Reopened 1932 as a privately owned mine

Negotiation by Fox to purchase mine

Work currently interrupted due to cinder in faces.”

AIS records – no author or address.

Commenced work in the Wongawilli Seam in 1961

Closed in 1982 due to the loss of a contract to supply coal to the Port Kembla Steelworks.

1983 – 17th Jan, Avondale Colliery closed and was purchased by Huntley Colliery, incorporating it into their leasehold. (Huntley Records)

Although immediately adjacent to Huntley colliery the mine is never reopened or utilised by Huntley, the leases being relinquished when Huntley closed in 1989.

25/05/2006 – Representatives from Gujarat NRE explore the mine workings after nearly a month of reopening the seals.