c1883 - the coal seam behind Clifton was known and had been accessed with little development. **

> 1883 - North Illawarra Coal Mining Company opens a new mine by John Williams at South Clifton. A shaft was sunk on the eastern side of the Illawarra Railway. Man-access was by adit overlooking the ocean. **

1885 – Oct.14th; Mr. Wm. Wilson, on behalf of Thomas Saywell and himself notifies the DoM of starting a coal mine at Bellambi. No current u/g operations with 3 men on the surface. The colliery name is undecided (DoMAR 1885)

1887 – Clifton Colliery closed by Minister as dangerous based on surface subsidence reported by inspector. Miners request that the Minister lifts the notice. (The Maitland Mercury & Hunter River General Advertiser, 3rd May, 1887)

1891 – South Clifton Shaft Mine is re-opened under Thomas Saywell (Adams, “Beyond Bulli”)

1891, February – mine purchased by Saywell & Wilson. A new shaft was then sunk on the western side of the Illawarra Railway, becoming the winding shaft. The original shaft was maintained as an upcast ventilation shaft, with fan engines and boilers, together with a later acquired electrical installation being dismantled in February, 1956.**

1891 – “Messrs Saywell and Wilson are about to sink a shaft for coal immediately on the western side of the Sth Clifton railway station. Expect to reach coal at 150 ft.” (Nthn Star, Lismore, 4/3/1891) 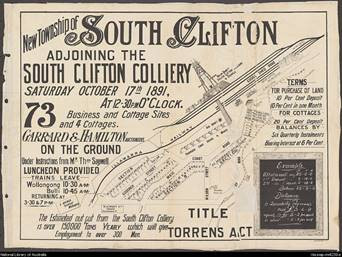 1903 – 28th July, the Secretary of Saywell’s Collieries (Limited) gives notice that the South Clifton Colliery would be closed from August 1st until further notice. (DoMAR 1903)

1905 – Operating with J. Wilson as Mine Manager and John Hopkinson as undermanager. (DoMAR 1905)

1907 – Multiple fatalities -13th April; Michael A. Cavanagh, 36, Joseph Horder, 30, Joseph Billington, 24, Arthur Selby,19, killed by roof fall from a new tunnel. This tunnel was only some 11 yards into the seam approx ½ mile south of the colliery. The Manager is charged with manslaughter [no Gen Rule 4 inspection] however he is acquitted. (DoMAR, 1907)

1907 – An inquest was held in the Scarborough Hotel into the death of four miners killed by a rock fall in the South Clifton Colliery. (The West Australian 8/05/1907 p8)

Sth Clifton closed in 1921 with a new adit formed 2 km south to be known as the South Clifton Tunnel Colliery.

1919 – Notice of Discontinuance and abandonment of South Clifton Colliery received by DoM 3/7/1919. Discontinued due to the influx of surface water caused by the extraction of pillars and the heavy local rain during May. (DoMAR 1919)

1929 – Fatality – 26th Jun wheeler, W. Anderson, received lacerations to two of the fingers of his right hand, dying of blood poisoning about a month later.

1930 – Various sources report that the Scarborough Mine is to shed 375 men and the South Clifton Mine, some 400 men, due to loss of coal markets?

1939 – The Royal Commission on Health and Safety in Mines is told by Inspector R. P. Jack of the Mines Dept. that Scarborough Colliery is to be closed down and offered for sale, having not made a profit in the last seven or eight years. (Newcastle Morning Herald & Miners Advocate, 10/06/1939 p13)

1948 – Aug 27th, South Clifton Colliery taken over by the Joint Coal Board

1949 – 26th Oct, a fire occurred at the No. 14 district compressor, the compressor stalling and the motor continuing to run, igniting the slipping vee belts. No safety valve was fitted. (DoMAR 1949)

1954 – “50 yr old South Clifton Colliery is undergoing a complete mechanisation. U/g is mechanised, trackless mining with conveyors from face to main haulage way to be loaded into skips. This is soon to be replaced by a 2 mile conveyor belt, claimed to be the longest installed belt in Australia, to bring coal direct to the surface.” (Newcastle Morning Herald & Miners Advocate, 17/12/1954, p2. Ex Trove)

1956 – The equipment and buildings removed from the original eastern shaft.

1957 - Joy 1CM continuous miner introduced to Sth Clifton Colliery. (This m/c was donated to the “State mine” museum, Lithgow, by North Bulli Collieries P/L upon closure in 1973)

1969/70 – Extensive reserves added to the western leases. Two shafts required to ventilate if to be viable. A raise borer is imported from USA and 2 x 7’ raise bores drilled. (DoMAR1969/70)

1970/71 – Raise bores suffering water inflows and wall collapse, starting to affect the shafts. The future of the colliery is dependent on the satisfactory operation of these shafts. (DoMAR1970/71)

1972 – Reported that Clutha Development Pty Ltd is about to cease production at South Clifton Colliery and close down North Bulli #2 Colliery (associated with Sth Clifton) due to loss of contracts. 280 men would lose their jobs. (Canberra Times, 29/03/1972, p9. Ex Trove)

1972 – A dispute between the owners and employees of South Clifton Mine which led to the men illegally entering the mine and switching on the power on three consecutive days, is resolved. A meeting leads to the men being restored to the payroll and re-entering the mine to commence dismantling of the u/g equipment. (Canberra Times, 11/05/1972, p10. ex Trove).

1972 – 11th May, Notice of Discontinuance for South Clifton and North Bulli No.2 Collieries is received by the Dept. of Mines (DoMAR 1972).

1973 – 28th Nov, Notice of Recommencement of South Clifton Colliery is received by the Dept. of Mines, as is the Notice of Discontinuance of North Bulli No. 2 Colliery. (DoMar1974).

1992 – July, questions raised in Parliament as to the South Clifton Coal Waste Dump and the Stanwell Park Viaduct Collapse in 1985.

1998 – Discussions in Parliament as to Kembla Coal and Coke’s responsibilities re the stabilisation of the old South Clifton mine site.