Connected to Govt. railway siding at Towradgi in 1913

A coal mine known as Owen’s Mine was opened up in the 4’ seam with a tunnel driven in a NW direction, quickly encountering good coal. Coal was delivered by flying fox on a wire rope just inside the northern boundary line of Looney’s to a storage bin on Brokers Road. (Ryan, F. “My Balgownie” p42/43)

1909 - The Owen Balgownie mine has operated only a few days but is working smoothly. The full skip coming out of the pit on a set of ordinary truck wheels but as it passes under the cable an uplifted arm comes in comes in contact with it and the skip is lifted from its wheels and swings in the air ready for its descent. There is an empty skip waiting at the lower end to be drawn up by the descending skip. Currently only carrying about 700 lbs of coal each trip the cable is capable of about one ton. (Ill Mer. 15/10/1909 p4)

Initially the colliery is manned by 2 men underground and 2 on the surface (a man & wife team of Mr.  & Mrs. David Emery).

A self-acting aerial ropeway carries coal from the mine to a depot lower down the mountain (approximately opposite the current Balgownie Public School). Horse drawn vehicles continued the journey to local consumers.

1910 – Nth. Illawarra Council agrees with the conditional granting of a part of Balgownie Colliery Ltd application to lease land for a tramway from colliery to main railway line. (Ill Merc. 19/08/1910, p4)

1910 – Work commences on the making of a siding near Corrimal for the new tramline from Balgownie Colliery. Ingersoll “puncher” is delivered to the mine, currently not working. (Ill Merc. 201/12/1910, p2).

1911 – 20th May, - A new standard gauge siding (called Orielton Siding) opens on the western side of the main line immediately south of Towradgi Stn, intended for use with a tramway proposed from the mine adit.

1913 - November - the mine is floated without any takers.

1914 - September, - there is an offer to purchase however this is withdrawn due to the outbreak of hostilities.

1920 – Mount Kembla (Extended) Ltd is registered as a new company having some 10,000 in capital, to acquire from Mr William Wiley, certain lands to carry on coal mining. Directors will be Arthur Rickard and John Yelverton Mills. (SMH 28/01/1920 p13 ex Trove)

1921 – E. W. Owens takes over the leasehold of Balgownie Colliery.

1922 – 9th June, - a company is formed called Mount Kembla Extended and registered to work Owen’s Balgownie mine. Capital raised was 35,000 pounds with Adam Frost (interests in Mt. Kembla Mine) as principle shareholder. The mine is called Mount Kembla (Extended) Colliery and K.E. Orielton siding becomes known as Frosts siding.

1922 – “The coal property at Balgownie known as Owen’s Balgownie Colliery which some six years ago was taken over by the Balgownie Colliery Ltd has been acquired by a company registered as Mount Kembla (Extended) Coal Company. The Balgownie Colliery Ltd failed to make good its assets, i.e. 15 acres of land at the junction of the tramway and the Government railway and were acquired by Mr E. W. Owen. The main intention is to work the 4 foot seam in conjunction with pillars left behind in the top seam of the property worked some thirty years ago by the Mt Pleasant Coal Co.” (South Coast Times and Wollongong Argus 9/06/1922 p14 ex Trove)

1922 – December - a new self-acting incline has been installed from adit to foot of hill. A steam operated winch is installed to draw the skips out of the mine. A tramway from the foot of the hill to the loading staithes at the siding is installed.

1922 – The siding to connect Mt Kembla (Extended) coal mine with the main line has been put in with expectations to call tenders shortly for the tramway. (Ill. Merc. 4/08/1922 p2 ex Trove)

1922 – The Mt Kembla (Extended) Coal Co is laying double track to the foot of the incline. The tunnel mouth has been repaired with substantial timbers with the commitment to lay rails down the incline. It is intended to run the coal in skips down to screens erected near the Main South Coast Road at Fern Hill where an engine house has already been built in which an engine will be placed to haul coal from the foot of the incline by endless rope. (Ill. Merc. 8/12/1922 p2 ex Trove)

1923 – The first consignment of coal from the Mt Kembla (Extended) Colliery was despatched on Monday, 7th May. The colliery’s first injury was suffered by John Cook, 55, when a cable slipped when being replaced on a Tommydod. (Ill. Merc. 11/05/1923 p1 ex Trove)

1923 – There are 11 miners now employed at the Mt Kembla (Extended) Colliery. Portion of the coal goes to Sydney, the remainder to Port Kembla. The mine was idle on Monday 10th due to surface water disposal problems, on Tuesday 11th, in sympathy for the funeral of their late undermanager, Mr. Yates.  (South Coast Times and Wollongong Argus 14/09/1923 p10 ex Trove)

1923 - The Mt Kembla (Extended) Colliery will suspend operations at the mine for the purpose of installing additional machinery. It is expected to be New Year before operations resume. (Ill. Merc. 16/11/1923 p2 ex Trove)

1924 – August, a contract for boiler coal is formed with Sydney City Council, allowing 60 men to be employed, producing 1400 tons/week.

1924 – Fan installed replacing natural ventilation for the colliery. Reported as employing 63 u/g and 23 at the surface. (DoMAR 1924)

1926 – February - Industrial problems lead to the mine being closed February to May. 60 men generally employed u/g and 27 on the surface. (DoMAR 1926)

1926 – Advertisement; Mount Kembla (Extended) Coal Coy. Ltd: “The employees of the abovementioned Company are hereby notified that the colliery will commence operations forthwith. Any employee not presenting within fourteen days will be replaced”. (Ill Merc. 04/06/1926 p11 ex Trove)

1927 – Mount Kembla (Extended) Coal Company Limited: Tenders will be received until 12 noon 19th February 1927, for the purchase of the above company’s coal mine and property together with all machinery, moveable plant etc., situated at Balgownie. H. J. Lambeth, Secretary. (SMH 03/02/1927 p16 ex Trove)

1929 – Ventilation reported as unsatisfactory by the Inspector. The mine worked all year with 17 men u/g and 20 at the surface. (DoMAR 1929) 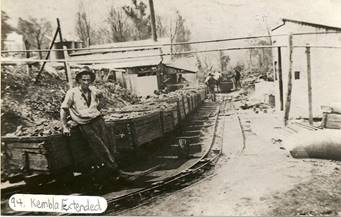 1934 – An extraordinary meeting on 29/06/1934 of the Mount Kembla (Extended) Coal Company Ltd passed a resolution that the company be voluntarily wound up. Harry James Lambeth is appointed liquidator. (SMH 03/07/1934 p1 ex Trove)

The complete plant plus 13 acres of land, includes:-

1936 – 26th October - the Mt Kembla Extended mine closes permanently. The siding and tramways are dismantled and removed.

1942 – A proposal by Illawarra Coke Co. Ltd to purchase the Port Kembla Coal Co. and the Mount Kembla (Extended) Ltd has been recommended to shareholders. (SMH 03/04/1942 p2 ex Trove) 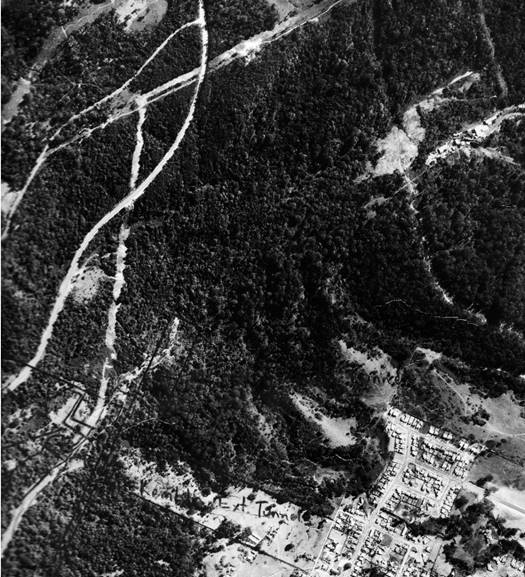